Gym warning: Drinking THIS before a workout could be deadly 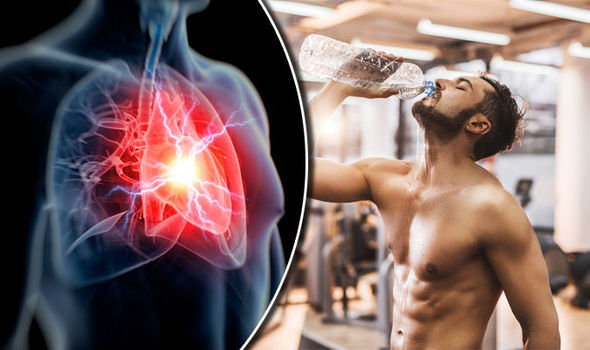 As the UK becomes increasingly health-conscious, people are paying more attention to optimising their workout sessions than ever before.
Along with protein shakes and bars, sports energy drinks have become an integral part of the gym routine.
Indeed, our consumption of them soared from 235 to 600 million litres in the UK between 2006 and 2014, and the market is set to be worth £600million by 2020.
The benefits to your workout seem obvious – an extra kilometre on your run, or ten more crunches completed – but unlike a gym membership, energy drinks should be used sparingly.

In fact, over-consumption of them has been linked to heart disease.
“Energy drinks can be harmful to the heart – either as a single excessive consumption, or consumed chronically over a long period,”
said Dr Alessandro Giardini, a cardiologist for Doctify.

“While in the past consumption of energy drinks containing caffeine was the prerogative of athletes who used then in moderation to boost their performance, consumption nowadays they are used much more widely by people at the gym for their daily work outs, when they have busy days, or even as a substitute for water.”

“There is scientific evidence than drinking energy drinks in large quantities can affect health in multiple ways.”

“Excessive use has been linked to heart rhythm irregularities which can be life-threatening, high blood pressure, seizures, obesity, diabetes and miscarriage.”

This is because energy drinks can contain significant amounts of caffeine and other stimulants.

“These substances can increase the excitability of the heart, causing extra beats to occur,” explained Dr Giardini.

“They can also increase high blood pressure and they can overstimulate brain cells, leading to seizures.”

He said it is recommended you drink no more than two energy drinks containing caffeine a day, however for some people this is still too much for their heart.

“The level of caffeine likely to cause problems in people will vary depending on the age, gender (will affect women more as they have a lower body mass) and pre-existing heart conditions,” said Dr Giardini.

“A person with no pre-disposing condition might not have a problem, however there are some situations – not uncommon – where just one energy drink can cause irregular heart rhythms with life-threatening consequences.”

Additionally, energy drinks can contain significant amounts of sugar, and it is suggested the upcoming sugar tax is likely to have an impact on their sales.