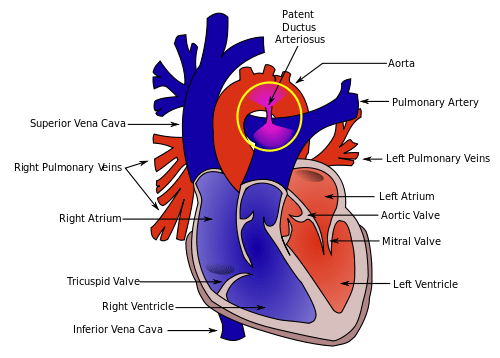 What is a patent ductus arteriosus?

The structure called ductus arteriosus (or arterial duct) is a normal blood vessel that connects two major body arteries (the pulmonary artery and the aorta) that carry blood away from the heart (into the lungs and the body respectively) during foetal life. The role of the ductus arteriorus is to divert blood away from the lungs, sending it directly to the body; it is a normal structure. We all had a ductus arteriosus during our heart development. As the baby in the womb gets its oxygen directly from the mother’s placenta, there is no reason for the blood to directly reach the lungs, which are full of amniotic fluid. As the baby is born, takes its first breath and starts using the lungs, the ductus arteriousus is no longer required and it closes spontaneously, usually within the first 2-3 days of life. However, the normal process of closure does not occur in some children, a condition called patent (or open) ductus arteriosus. As a result of this, some oxygenated blood flows from the aorta back into the lung arteries through the PDA. This causes some extra strain to the left ventricle (the left sided pumping chamber) and also increased blood flow to the lungs. This video shows very clearly and simply what the blood flow in a normal heart is like.

What are the causes of PDA?

The exact causes of PDA are unknown but genetic factors may play a role in some children. Children who are born prematurely are more affected by PDA, as the normal process of closure seems to be less effective in babies born early. Some other conditions like neonatal respiratory distress syndrome, some genetic conditions (such as Down’s syndrome) or some infections (such as German measles or rubella) contracted by the mother during pregnancy.

Diagnosis and treatment of PDA?

In children born with an otherwise normal heart, the PDA is of no benefit and it might require treatment. In some children, particularly those born with other congenital heart defects, the PDA could actually be beneficial as a way of maintaining a sufficient amount of blood flow to the lungs or to the body after birth. In these children, doctors might actually administer a medication to keep the PDA open. PDA can be silent if the size is small compared to the body size and the blood flow shunting across it is therefore limited. Symptoms are generally seen in the context of a moderate or large size PDA. The typical symptoms reported are: fast breathing; poor feeding and failure to thrive; sweating while feeding; getting tired easily; poor weight gain. The above mentioned symptoms are more common in babies and infants. Older children with moderate PDA might present with a merely reduced tolerance to exercise when compared to their peers. The diagnosis of PDA can be generally suspected by examination, as it can be associated with a typical heart murmur. If a diagnosis is suspected, your paediatric cardiologist will perform anechocardiogram to confirm the diagnosis and acquire some important information on the anatomy of the PDA, which might be helpful in deciding the best course of treatment. Small babies with large PDAs require surgical ligation of the PDA, which is performed from an incision on the left side of the chest wall. Older children with moderate or large PDAs might benefit fromkeyhole closure of the PDA with an umbrella device. In some children where the PDA is small but a clear and distinctive murmur can be heard your paediatric cardiologist might still recommend key-hole closure of the PDA to prevent the risk of the PDA becoming infected, a dangerous condition known as infective endocarditis. When a small PDA is found incidentally in an otherwise well child with no murmur then generally no treatment is recommended. In each case the recommendation for treatment has to be individualized based on the size of the PDA, the weight of the child and the presence of symptoms. The good news is that this congenital heart defect can generally be treated very safely and effectively.