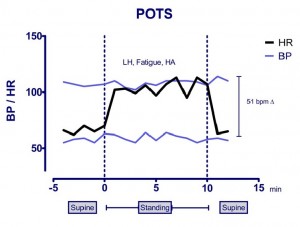 POTS is a syndrome (a combination of different symptoms) caused by a malfunction of the autonomic nervous system. The autonomic nervous system is a complicated network of nerves that controls some vital bodily functions and which works in an automatic mode out of our voluntary control. For example when we stand up quickly, we would all experience a slight drop of our blood pressure due largely to the effect of gravity and the body will have to enact some compensatory manoeuvres to re-establish a normal blood pressure. This will cause some of the body arteries and veins to shrink and the heart to start beating slightly stronger and faster. All this will happen in an automatic mode not under voluntary control.

Many conditions can affect the function of the autonomic system, thus producing “secondary” POTS. However, in some patients, a cause for POTS is not identified despite extensive investigation. POTS has been observed to commence after a viral infection, or an acute stress like surgery, a trauma or a vaccination. Many factors are also been associated with POTS and these include: physical deconditioning (being very unfit), excessive function of the adrenergic system (excessive release of adrenaline by the body), norepinephrine transporter deficiency, joint hyper mobility syndrome (Elhers-Danlos type III), chronic fatigue syndrome, mast cell activation and several autoimmune conditions.

How is POTS diagnosed?

To be diagnosed with POTS children and adults have to have a combination of symptoms (not necessarily all symptoms) which occur when they are in the upright position (generally when standing) which improve (even partly) or resolve when lying down. Besides the typical symptoms, it is necessary to document an abnormal function of the component of the autonomic system that controls heart rate. In practical terms this is done by measuring the change in heart rate observed from lying down to standing up. A sustained increase in heart rate of >40 beats minute in the 10 minutes following standing is considered diagnostic in children. Blood pressure can drop while standing in patients with POTS even that is not usually the case. This test which is called an active standing test can be performed as an outpatient test.

Excluding a cardiac cause for the symptoms (an arrhythmia or a structural heart problem) generally requires seeing a cardiologist with expertise in POTS as well as undertaking an electrocardiogram (ECG) and an echocardiogram. In some instances further tests may be required (24 hour ECG monitoring, active standing test, head up tilt test, cardiac MRI). Additionally blood tests will also be required at the time of the assessment.

What are the symptoms of POTS?

The symptoms of POTS are numerous and can be vary disabling. This is particularly true as most of the usual cardiology investigations and tests performed in children and adults with POTS will be usually reported as normal despite patients objectively reporting the heart rate as being excessively high and the heart pounding (palpitations). Additionally many physicians are unaware of POTS.

The most common symptoms noted in POTS are:

Some triggers are known to worsen symptoms:

How is POTS treated?

Many of the symptoms of POTS can improved with a multidisciplinary approach which includes lifestyle changes, counter maneuvers, physiotherapy/exercise and medications. Medications include those that slow down the excessive increase of heart rate (ivabradine or beta-receptors blockers), those that increase blood pressure (midodrine) and those which expand blood volume (fluidrocortisone). Medications are generally used to get children well enough to be able to start a physiotherapy/rehabilitation program. The majority of children who develop POTS as adolescents will not have symptoms by the time they will be young adults.