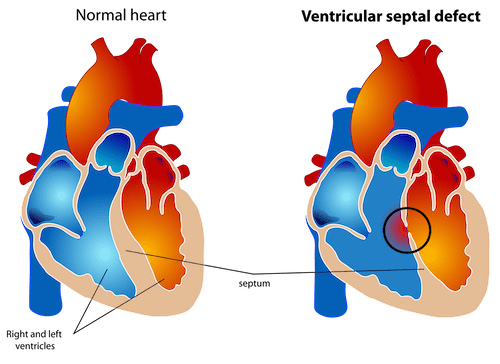 What is a VSD?

A ventricular septal defect (VSD) is a type of congenital heart defect where there is an abnormal opening in the wall that normally divides the 2 pumping chambers of the heart (called the ventricles). VSDs are the most common form of congenital heart defects and in most cases they are diagnosed and treated successfully with very few or no complications at all. In order to understand the consequences of a VSD we have to start considering what happens in a normal heart. In the normal circulation the blood which is low in oxygen returns to the right-sided back chamber (right atrium) and passes in the right-sided pumping chamber (known as the right ventricle) from where it is pumped to the lungs. Once the blood has been enriched in oxygen, it flows back to the left sided back chamber (left atrium) and it subsequently passes into the left pumping chambers (left ventricle) and is then pumped into the general circulation to provide oxygen to the body. In a normal heart, a wall, called the ventricular septum, separates the left ventricle and the right ventricle. This video shows very clearly and simply what the blood flow in a normal heart is like.

A ventricular septal defect consists of an opening in the wall separating the two pumping chambers. Generally, the pressure in the left ventricle is much higher than the pressure in the right ventricle and as a consequence of the VSD there is passage of some oxygenated blood from the left to the right-sided ventricle. This typically produces a noise called heart murmur. This heart murmur can be usually heard when the doctor listens your child chest with a stethoscope. The VSDs can be located in many different parts of the inter-ventricular septum and can have different sizes. Ventricular septal defects in the muscular area of the inter-ventricular septum are the most common type of VSD. These types of defects generally tend to close spontaneously over the years and treatment is rarely required unless they are large in size. VSDs in other parts of the inter-ventricular septum are less likely to close spontaneously and more often require treatment because of either their size or because of their interference with some other important heart structures.

What are the causes of VSD?

We do not know exactly what causes VSD in most children. It occurs during foetal heart development when the heart develops from large tube into 4 different heart chambers. If something goes wrong in this process a VSD can be created. Most VSDs in the muscular part of the inter-ventricular septum will close in the first few months after birth. A way to look at this is to consider that the normal process of separation of the left and right ventricles (septation) is not completed by birth but continues in the first few months after birth. In some cases, the cause of the VSD can be found in a genetic syndrome (with extra or missing pieces of chromosomes). However, the great majority of defects have no clear genetic cause.

What are the symptoms of VSD?

Babies and children with small VSDs generally only present with a heart murmur. Rarely do children with small VSDs present with signs and symptoms of complications of the VSD (infective endocarditis, which is a bacterial infection of the VSD, narrowing of the outflow from the right or left sided pumping chamber, or leakage of the aortic valve). Babies with larger VSD have symptoms related to high blood flow to the lungs: breathlessness and laboured breathing, easy sweating, poor feeding, poor weight gain, pale or mottled colour, frequent respiratory infection. These symptoms are caused by the fact that there is some fluid retention and both this and the increased lung blood flow cause the lungs to become stiffer. Stiffer lungs means that children find it harder to breath and feed and use more of their energy intake in breathing. In babies with large ventricular septal defects, symptoms appear at around 4 weeks of age and become more important in the second and third month of life. In some rare cases, VSDs are part of more complex types of congenital heart disease.

When and how to treat a VSD?

When a VSD is suspected, your cardiologist will perform an echocardiogram to confirm the diagnosis, establish the position and size of the defect to exclude associated congenital heart defects. The decision to undertake surgical treatment of the VSD depends on its location and size, and to some extent on the weight of the baby (small babies might be better off waiting for some time until they become heavier so that the operation carries less risk). Babies and children with symptoms of high blood flow to the lungs find some temporary benefit from diuretic treatment (particularly furosemide), which reduces fluid retention by increasing urine production. These symptoms generally indicate that the VSD will not undergo spontaneous closure, and cardiac surgery may be needed. This usually is done within the first 3 months of life to prevent other complications. Closure of the VSD is achieved either by direct stitching of the hole or most commonly by the use of a manmade or artificial patch which is stitched to the edges of the hole. The heart tissue will slowly grow over the patch. In order to close the VSD the surgeon makes an incision through the breast bone and has to use a heart-lung machine to maintain the circulation while the operation is undertaken. The success rate of this surgery is very high and the recovery usually only requires few days in hospital. After a successful repair, the heart will generally return to a normal state and a normal longevity and quality of life can be expected. Children with small defects generally do not require treatment unless the defects are interfering with any other cardiac structure or are associated with other complications. Medical follow-up and repeated echocardiograms over time are all that is required. Older children or teenagers who have small VSDs that persist usually don’t experience any symptoms other than the heart murmur that doctors hear. They might need to see a doctor regularly to check on the heart defect and make sure it isn’t causing any problems. They will not need to restrict their physical activities. Rarely, children can have their VSDs closed with key-hole interventional techniques.